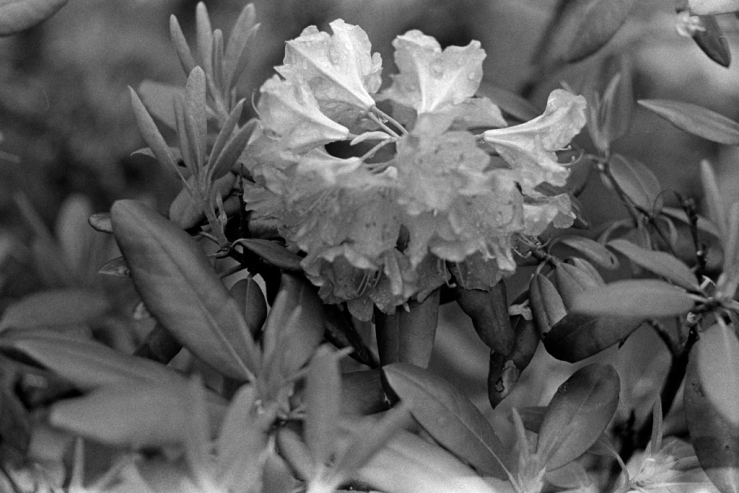 Recently I wrote about catching the MF bug again and setting off to take some pictures with an old Rolleiflex. How did it turn out?

I took two pictures of the subject I had in mind, but nothing else caught my attention on the walk there or back. A week later the Rollei was still sitting on the shelf with just the two frames exposed. In the meantime I had taken an entire 12-exposure roll of pictures with the IIIf, developed them, digitized them, made a contact sheet, bulk loaded another roll of HP5+, put it in the Leica, and taken a couple of pictures of a neighbor’s work on a new fence.

Enough! I took the Rollei out to the back yard and finished the roll with pictures of the damage the deer have done to our rose bush and other plants. I developed the roll and saw a minor light leak at the beginning of the roll, likely caused by my fumbling when I loaded it. But the second frame was better than the first anyway so no harm done. Otherwise the exposure and development looked good.

I can digitize MF negatives with the BEOON setup I use for 35mm but it’s a nuisance to configure it for MF (and back for 35mm again) and painfully slow and cumbersome to use for MF compared with 35mm, so I used the Epson flatbed scanner instead.

I sprayed and wiped down both glass surfaces of the scanner and the negative holder and then went over them with an Ilford anti-static cloth. It took longer to scan each of the two frames I was really interested in than to digitize an entire 12-exposure roll of 35mm. And, sadly, when I opened the scans in Affinity Photo the dust that I always encountered in the past with MF was back again. Nothing I couldn’t deal with in post processing, but still a nuisance.

It may be at least partly because I dislike working with MF negatives but, honestly, when I printed the picture that I wanted in the first place there was no MF magic. In a side-by-side comparison I preferred my recent HP5+ pictures (like the one above). I have no more MF film and it’s unlikely I’ll be buying any more soon.