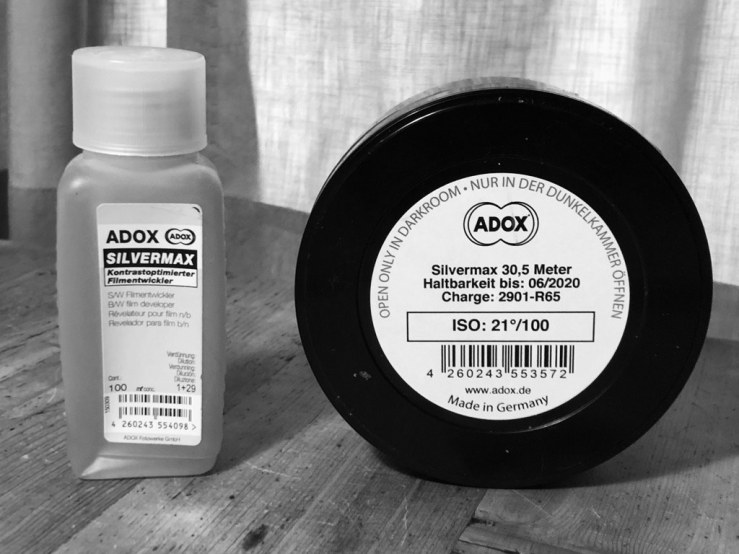 Last year I was given a couple of 36-exposure rolls of ADOX Silvermax 100. I don’t like 36-exposure rolls so they sat unused until I recently finished the 100′ roll of HP5+ in one of my bulk loaders and was able to use the loader to break the two 36-exposure factory loads down into four 12-exposure loads in Leica FILCA cassettes.

I shot one roll at ISO 100 and developed it in ADOX Silvermax developer I bought from B&H. I liked the results. I shot a second roll, again at ISO 100, and developed it in Rodinal (1+50) per ADOX instructions. I liked the results even better. I bought a 100′ roll of Silvermax 100 from Freestyle and bought another Watson 100 bulk loader on eBay. [More on bulk loading Leica FILCA cassettes in an upcoming post.]

This morning, just for fun, I looked at the B&H site to see what they were asking for a 100′ roll of Silvermax 100. They said the 100′ roll is discontinued. They still show the 35-exposure rolls for $8.99 but say they are back ordered. I’ve had enough experience with back ordered items from B&H to take that with a big grain of salt. I went back to the Freestyle site and the 100′ roll is not there at all. They do show the 36-exposure roll for $8.99 and the Silvermax developer for $12.49, but the developer is shown as low stock. I thought I might standardize on Silvermax 100 as my medium speed film but that isn’t going to work if it is no longer available in 100′ rolls. Breaking down 36-exposure factory loads into 12-exposure bulk loads is expensive, it’s a fussy job, and I think it’s more work than it’s worth.

At this point I am working with two ISO 400 films, HP5+ and Tri-X, and I still want to try some of the others, particularly FOMA. The same story, until recently, with ISO 100 films. I am using FP4+ and Silvermax 100, but now it looks like I might be dropping the Silvermax so I really want to try some others. I am using just one ISO 50 film, Pan F, and still after all these years mourning the demise of my beloved Panatomic X. The only constants here are that I am only going to use films available in bulk rolls, I am not going to use any tabular or T-grain films [More on this in an upcoming post] and I am only going to develop my film in Rodinal.

1 thought on “Another One Bites the Dust?”