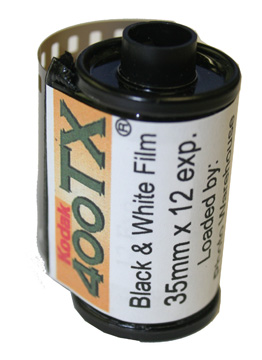 35mm film has been sold in rolls of 12, 18, 20, 24 and 36 exposures, and maybe other lengths. Today the only choices are 24 or 36 exposures – with only one exception I know of. If I want to work with 35mm but don’t want to wait until I’ve taken that dozens of pictures to see my results I have three options: develop the roll before I shoot all of the frames, buy short reloads of some film stocks from Photo Warehouse, or bulk load my own film.

I am using up my small stock of factory load film, mostly 36 exposure rolls, and in almost every case I develop the film with no more than 12 frames exposed. (I cut off half the length in my changing bag anyway because the very dilute Rodinal developer I use doesn’t have the capacity to develop a 36 exposure roll with the 250ml of solution in the little Kindermann tank.)

I recently found that Photo Warehouse sells 12-exposure reloads of some film stocks. I just ordered 10 rolls of Tmax 100, a film I’ve been wanting to try since I saw some beautiful prints a friend made using it.

And I have standardized on 12 exposure rolls for my bulk loaded 35mm film. I usually carry a second loaded cassette in my jeans coin pocket when I go out to take pictures, but I seldom use it.

I am working on posts describing my experience with bulk loading 35mm film and with developing film with Rodinal. Watch this space.